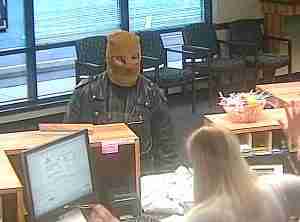 No arrest had been made as of Wednesday morning. FBI Special Agent Vicki Anderson said there was no new information to share and asked for residents to continue looking at photos of the suspect and calling in tips.

The culprit wore a dirty yellow ski mask and brandished a silver revolver when he struck at 3:43 p.m., according to surveillance camera stills released by the Wellington police.

Investigators described the suspect as a single white man wearing a leather coat over a plaid shirt, with jeans.

A witness called police while the robbery was in progress, but the man was in and out of the bank in only a few minutes, said Police Chief Tim Barfield.

No one was hurt during the robbery, police said. The amount of cash taken was not disclosed.

Police dogs were used in an attempt to find the suspect, and Wellington police searched residential properties around the East Herrick Avenue bank with assault rifles at the ready.

“We will not allow anyone to terrorize our visitors, employees or residents,” police said on social media, sharing pictures from the bank’s cameras. “You will see the suspect is armed and threatened the men and women in the bank at the time. We are following up on numerous leads and have additional witnesses who are helping to provide solid information.”

A reward is being offered for information that leads to an arrest and conviction. Tips can remain anonymous.

This is not the first time a Wellington bank was robbed.

In July 2014, James Wingard robbed the LorMet Community Federal Credit Union on Route 58, close to where he lived.

No gun was spotted, but Wingard allegedly reached behind his back and told a teller he didn’t want to hurt anyone, according to Wellington Enterprise archives. He left with about $900, led police and the FBI on a four-day chase and was eventually arrested in Cleveland.

Brandishing a semiautomatic handgun, he stole more than $11,000. In 2013, Fortier was sentenced to six years is federal prison.

Timothy Tuttamore of Bellevue pleaded guilty to three holdups in 2002, including one at Fifth Third Bank in Wellington.

News accounts of a bank robber who would leave his weapon and clothing behind as he made his getaway eventually pinned Tuttamore, who according to U.S. District Court records was sentenced to 18 years behind bars. 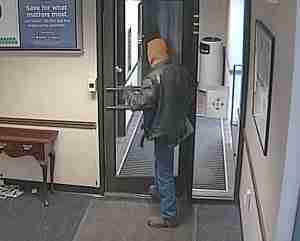